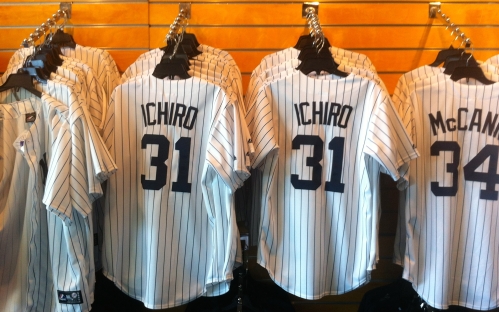 Right now I’m in Florida; this afternoon I snapped this photo in the team shop at the Yankees’ spring training home. Of course, the Yankees don’t put player names on the back of their actual game jerseys, but whatever.

Ichiro and the Seahawks Redux 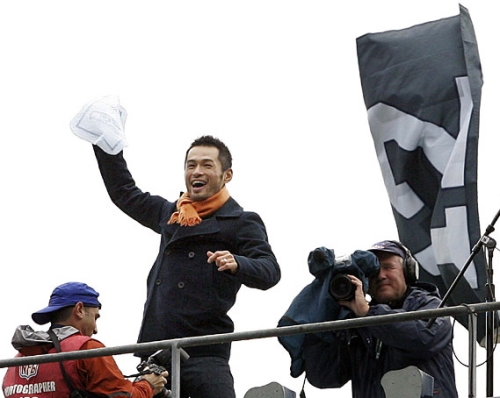 In honor of the Seattle Seahawks playing in Sunday’s Super Bowl, here’s some stuff reposted from my original Ichiro/Seahawks entry from September 25, 2011, plus a couple other things.

The above picture shows Ichiro at CenturyLink Field, two blocks north of Ichiro’s former Safeco Field home. The Seahawks have a pre-game tradition of getting a local celeb hoist a “12” flag over the stadium in tribute to the team’s noisy fans, collectively known as the “12th Man.” Ichiro raised the flag on October 21, 2007…

Here’s a video of something else, which I think is also from 2007, showing Ichiro wearing a Seahawks 12 jersey as he explains his base-stealing technique on Japanese TV…

Our man recently appeared in this bewildering video, which I sent to blog friend Yukiko Yoda for explanation. Take it away, Yukiko…

· The program was aired this week, 1/21, and filmed on 1/12 at ORIX Buffaloes practice facility

· Yes, it’s a Japanese weekly comedy TV show (I never watched and didn’t know until now though), hosted by Japanese famous comedian, Hamada (who kept slapping Ichiro’s head and a close friend to Ichiro) and Higashino

· The program of the day is titled as “Let’s cheer ORIX Buffaloes!”

· The pitcher is Nobuyuki Hoshino, a former pitcher of ORIX (1984–1999), currently ORIX’s pitching coach, and a close friend to Ichiro

· Ichiro was practicing at the facility on the day, heard about the filming, and, with a playful mind, decided to join. This was totally a surprise appearance and, Hamada, who had a dinner with Ichiro the previous day (Ichiro’s treat), and Higashino didn’t know that (that was why they kept approaching to find out who is that catcher).

· 1st slap: Hamada recognized it’s Ichiro and the slap was kind of a greeting “what are you doing here?!”. Ichiro well responded by reacting overly and returning to the position as if nothing going on. Higashino said “Don’t do that! He is Japanese treasure!”

· 2nd slap: Hamada saying “Speak something!” while slapping. Ichiro responded “He is a bad guy while camera is on. Otherwise a very nice guy normally”

· Other things Hamada and Higashino were talking to Ichiro, though never replied to, were “do you know our TV show, Gobu Gobu?” “You are here for a training camp?” “Was this arranged before? No? Then you don’t need to get paid for this appearance??”

Ichiro Talks to the Kids

Today’s edition of the Japanese newspaper Sanspo ran a story with photos of Ichiro addressing some young ballplayers. I don’t understand Japanese, so I ran the article through Google Translate, returning this:

Ichiro committing attention, “the very painful” to look back on this season

The 23rd, Ichiro outfielder U.S. Major League Baseball, the Yankees crushed the potential in yourself and cut corners in the “middle of the greeting at the closing ceremony of Ichiro Cup contention school baseball tournament was held in Aichi Prefecture Toyoyama town of hometown was encouraged baseball boys would. So the “want to go repeatedly small things.

It’s easy to go eye to just say “results, frustrating I think that was holding it lost the. Opponent there is a failure of more than double to support me now to look back and” painful very season “this season which achieved 4000 hits Japan and the United States total preached the importance of efforts to be “are.

Ichiro multiplied medals himself on the neck of each player sent the ale with a smile and “be strong, I want you to become a friendly adult pain of the human mind can be known” he said.

According to Ichiro’s Wikipedia page, “Ichiro is the honored chairman of the Ichiro Cup, a 6-month long boys’ league tournament with more than 200 teams, held in Toyoyama and surrounding cities and towns since 1996. Ichiro watches the final game and attends its awards ceremony every year.”

Here’s a link to the Ichiro Cup.

Ichiro, which team to play for next season is still unclear, reflects 2013 season as “very tough and bitter.”

On December 23rd, Ichiro, an outfielder of Yankees, MLB, gave a speech at the closing ceremony of the Ichiro Cup, a junior baseball tournament, held in his hometown, Toyama town, Aichi prefecture.
“If you do not try your best in any given circumstance, it means you are losing your chances to step forward and explore your potential abilities.” He encouraged “Do not underestimate the small efforts every day and every moment. They will lead you somewhere beyond you expected and desired.”

Ichiro achieved 4000th hits combined his career in Japan and MLB during 2013 season. However, he reflected this season as “very tough and bitter.” “People tend to remember the good results but there are more letdown moments, let’s say, more than twice as the good ones.” Ichiro emphasized “after all, these frustrations after defeated by opponents lifted me up and led me where I am now.”

After giving medals to each player of the winning team, Ichiro cheered with a smile, “grow up strong and considerate, to be able to feel and share someone else’s pains.”

Another Gift from Ichiro

In November 2012, our man sent the Ichi-Meter lady a bat and a pair of spikes. Now he sent her a wristband he wore last August when he got his 4,000th professional hit.

Honestly, I couldn’t bring myself to read the whole thing, but here are a few bits I came across:

I’m not that different from Spiderman… I’m a god in the sense that I’ve reached the summit of my field… My sword is a Jedi sword.

On Wednesday, Ichiro (along with teammates Shawn Kelley and Brett Gardner) visited a Bronx animal shelter as part of the Yankees’ community outreach program. Said Ichiro: “I would love to have pet owners out there really take care of their animals and be responsible. They are a part of your family, and to really take care of them so things like this (unwanted animals winding up in shelters) doesn’t happen.”

Here’s Ichiro with his own dog, Ikkyu.