This isn’t what we hoped for.

Back on Opening Day, I figured I’d be blogging about Ichiro cruising to his 11th straight 200-hit season — surpassing Pete Rose’s record of ten such seasons — as well as his 11th-straight .300 season, All-Star Game, and Gold Glove award. As usual, the expectations of him going into this year were quite high, and why not? He was coming off an unparalleled, Hall-of-Fame-worthy decade.

Instead, 2011 turned out to be a huge disappointment — as I said in my mid-season report, “yikes.” Let’s look at the numbers, noting that the “Career Averages” only include his stats prior to 2011… 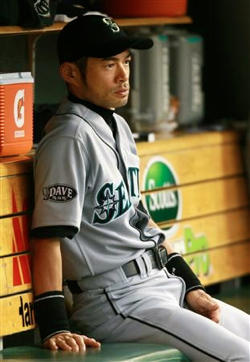 So Ichiro had a couple more stolen bases this year than his career average, but otherwise, he experienced painfully sharp drops in most every category. Apart from failing to reach 200 hits, his .310 OBP and .645 OPS were among the worst numbers for all leadoff hitters, as well as all regulars with his amount of plate appearances, and the very worst of any right fielder in the majors. On defense, he committed four errors for the third consecutive season. His career-worst was five errors in 2008, yet he still won the ’08 Gold Glove for the eighth time in ten seasons. Still, this year he occasionally looked shaky in right, so I’d be surprised if he’d be rewarded with yet another Gold Glove.

Following Wednesday’s season finale, Ichiro spoke through interpreter Antony Suzuki about his subpar season. According to Seattle Times Mariner blogger Geoff Baker (source of much of this info, and more), “Ichiro seemed to bristle when asked by reporters whether he’d thought often about extending his own major league record and reaching 200 hits for an 11th year in a row”…

This year, I’ve never mentioned about 200 — ever — during the season, nor in spring training. Nor did I mention that last year, too… I feel the communication is very tough because I’ve never mentioned it, nor have I thought about it. So, the psychology is very interesting from my standpoint. Because you never know what people think about you when you don’t show them. So, this year I felt I learned a lot as a human being. Not just as a player. Because that’s a part of being who I am. Knowing how people around me think psychologically.

Not sure what exactly he meant about that psychological stuff, and apparently he didn’t offer any explanation about the rest of his season’s shortcomings, but the “nor have I thought about it” line is hard to swallow. In previous seasons, though he might not have admitted it beforehand, once he reached the 200-hit milestone, he would then confess to it weighing heavily on his mind all along. After reaching the mark for the ninth consecutive season in 2009, he said of the pressure he felt from Japan: “For me, it’s not allowed for me to not accomplish this.”

So, what does this all mean? Was this just an off year, or are his abilities finally diminishing with his age? Has he lost a step? Has he lost his swing? Or was he distracted by something outside of baseball?

In any case, it seems that Ichiro’s career has come to a fork in the road. I’ll address what might lay ahead for him in my next post. 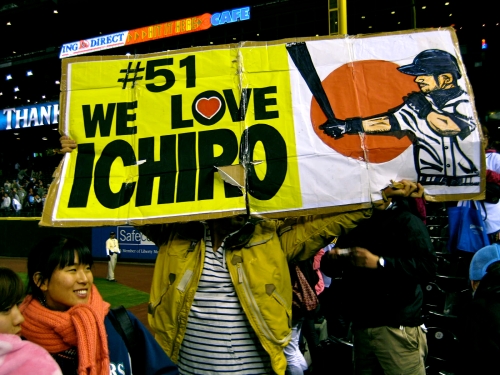 Ichiro on TV: The Tenth Inning

September 28, 2010: One year ago today saw the premiere of The Tenth Inning, the follow-up to Ken Burns’ epic 18-1/2-hour documentary Baseball, which first aired on PBS in 1994. Ichiro was interviewed for a cool seven-minute segment (above), summarizing his career to date in both historical and global contexts.

Bonus interview clips with Daniel Okrent and Tom Verducci may be seen here.

Following the 2003 season — after Ichiro’s third year with the M’s and noted pornography enthusiast Hideki Matsui’s rookie campaign with the Yankees — the two sat down for a long-ass conversation in a Japanese TV studio. Though I don’t understand what they’re saying, Ichiro and Godzilla appear to cover a variety of topics, judging by the little picture-in-picture videos in the corners. The whole thing runs about 94 minutes over a dozen segments, with the first one at the top and the other eleven below.

It Was Two Years Ago Today: Ejected! 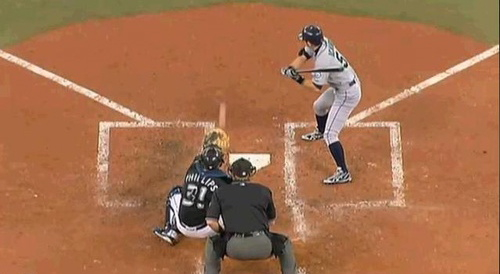 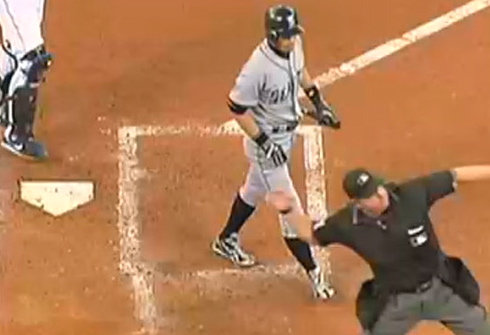 September 26, 2009: During a 5-4 loss in Toronto, Ichiro was ejected for the first (and so far, only) time in his major league career. After a called third strike, Ichiro had some harsh words for home plate umpire Brian Runge, and used his bat to trace the pitch’s path on the far side of the plate. Runge immediately tossed him, and the angry Ichiro had to be “restrained” by then-manager Don Wakamatsu. Roll tape…

It sure looked like a ball to me. Here’s a fan-made dramatization… 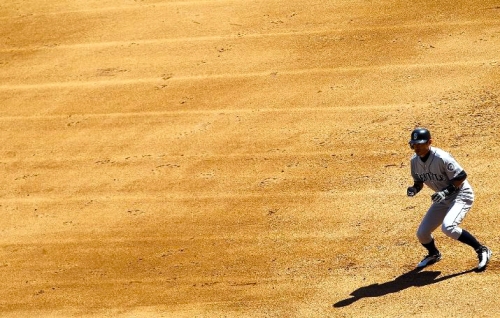 Ichiro and the Seahawks

Today marks the Seattle Seahawks’ 2011 home opener at CenturyLink Field, two blocks north of Safeco Field. The Hawks have a pre-game tradition of getting a local celeb hoist a “12” flag over the stadium in tribute to the team’s noisy fans, collectively known as the “12th Man.” The Seahawks even retired the number in 1984.

I dig Ichiro’s peacoat — I have one just like it! — but as I’ve written before, the 12th Man is stupid.

See also: Ichiro and the Sonics. 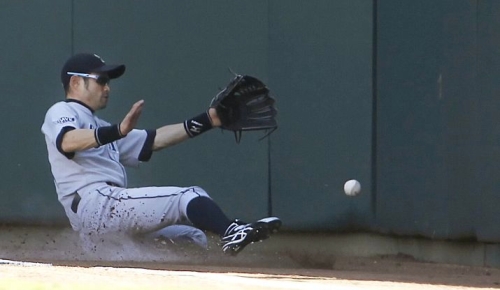 Back in ’01, some guy wore this giant homemade Ichiro head to a game at Safeco Field.

Looks like he got some autographs on its face.

This one’s the last Baseball Card of the Week of the season. It’s particularly fitting for the occasion, as it commemorates an event that happened one year ago today (see previous post). Moreover, it’s from the same 2011 Topps Heritage set as the first BCOTW of the season. Put together, they nicely bookend the year.

See all 24 installments of Baseball Card of the Week — plus some faux cards mixed in — here.

It Was One Year Ago Today: Tenth 200-Hit Season

September 23, 2010: In a 1-0 Mariner loss in Toronto, Ichiro got two hits to reach the 200-hit mark for the tenth straight season, tying Pete Rose for the Major League record of 200-hit seasons. Most incredibly, it took Rose 17 seasons to reach the mark (he was 37 at the time), while Ichiro did it in just ten, when he was 36… It’s not likely that Ichiro will get a record-breaking 11th 200-hit season, at least not this year. He’ll try again next year, when he’ll be 38.

Above are some of his fans at the game.

The “Ichi-Meter” is a common sight at Safeco Field, hanging above the outfield wall behind Ichiro’s  defensive position in right. It’s the creation of season-ticket holder Amy Franz , who hails from Algona, about 25 miles south of Seattle. At nearly every home game, Franz sits in the front row of the right field stands (known to some as “Area 51”), where she manually updates her counter after each of Ichiro’s hits. TV broadcasts of Mariner games often cut to the counter at such moments.

The Ichi-Meter first appeared in 2004, when Franz began documenting what turned out to be Ichiro’s record-breaking 262-hit season. That original Ichi-Meter (above) is now on display in Cooperstown, atop a display case containing Ichiro’s game-used artifacts from that historic year — bats, batting gloves, wrist bands, sunglasses, spikes, an elbow guard, and a jersey. She’s used another Ichi-Meter since then. 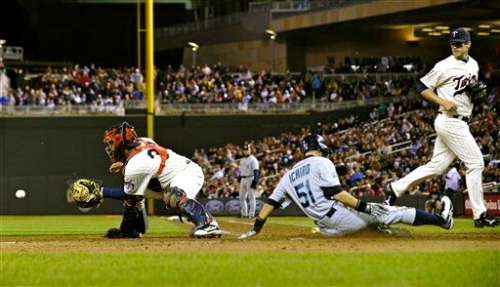 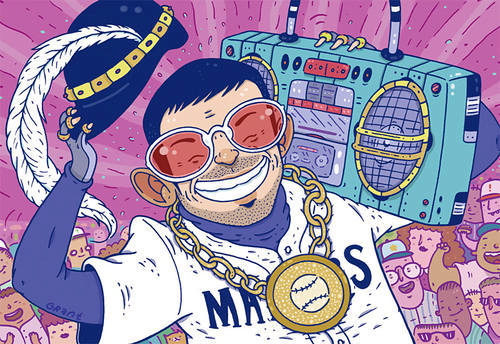 Culled from a variety of sources, these are some tunes that have accompanied Ichiro’s Safeco Field at-bats over the last decade…

The dumb illustration comes from this Seattle Weekly article. 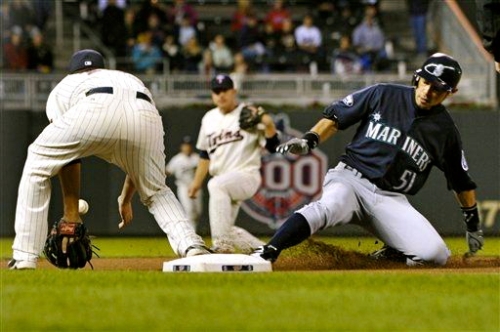 It Was Seventeen Years Ago Today: Ichiro’s First 200-Hit Season

In 1994, in his first full pro season, Ichiro had 210 hits for the Orix BlueWave, setting a Nippon Professional Baseball record. No previous NPB player ever had 200 hits in a single season, which, until that time, lasted only 130 games. That works out to 1.615 hits per game, an average he bettered with the M’s in 2004 with 1.617 hits per game (not to mention in a longer 162-game season, in which he played in just 161 games). Although his 262 hits in ’04 topped George Sisler’s 257 hits in ’20, Sisler’s former MLB record was set during a 154-game season, averaging a head-spinning 1.67 hits per game. Just imagine: had Sisler maintained that per-game hit average over a 162-game season, he’d’ve wound up 270 hits.

In any case, Ichro got lei’d, possibly by BlueWave mascot Neppie, off to the side in the above pics. Below, a genuine commemorative autographed something-or-other… 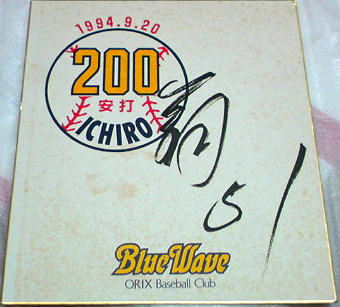 Since Ichiro’s record-breaking 1994 season, four other NPB players have reached the 200-hit plateau, though some (or all?) have happened during an expanded 144-game NPB season.

Ichiro’s record was broken in 2010 with a 214-hit campaign by Matt Murton of the Hanshin Tigers, albeit in a 144-game season… Thanks to commenter Richard for setting me straight!