At Bats: 4
Runs: 1
Hits, Game/Season: 1/112
Runs Batted In: 1
Walks: 0
Strikeouts: 0
Left on Base: 3
Average: .261
Box
Notes: Started in right, batted eighth… Flyout, flyout, home run, grounded into force out… The homer was his first as a Yankee, his fifth of the season, and the 100th of his career… 18th stolen base… Meanwhile, back in Seattle, M’s blogger Geoff Baker writes, One week post-Ichiro, he’s still the exact same hitter — fair enough. 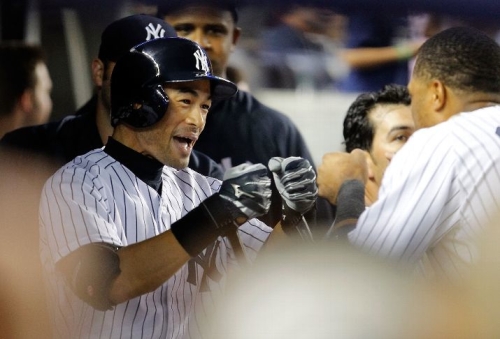 Based on the ’72 Topps design. 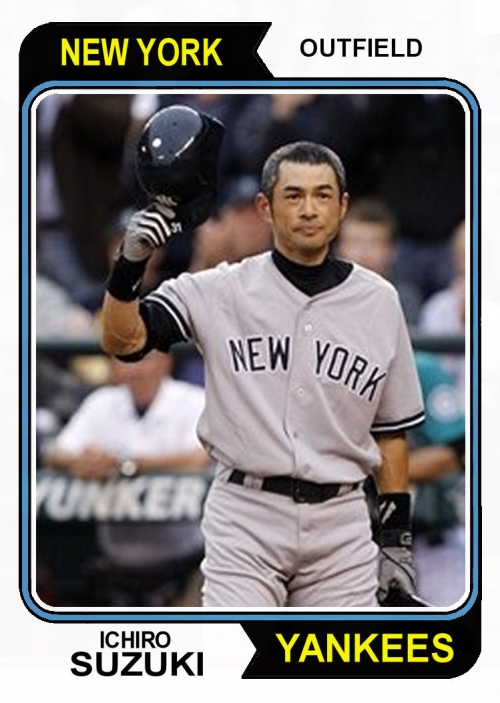 Based on the ’74 Topps design. Found here. 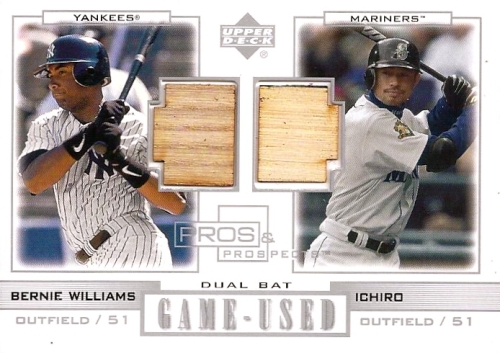 Ichiro has worn uniform #51 since 1992, when he was an 18-year-old rookie playing for the Orix BlueWave in Japan. When he became a Mariner in 2001, he was at first reluctant to wear 51, since it was previously sported by former Mariner pitching sensation Randy Johnson. However, he agreed to it anyway: “I’m very fortunate the Mariners would let me wear 51, and I’ll work hard not to damage the reputation of the number.”

On Monday, upon his trade to the Yankees, he had to give 51 up. In New York, the number is closely identified with beloved Yankee outfielder Bernie Williams, who played his entire pro career in the Bronx between 1991 and 2006. The Yankees haven’t retired Bernie’s number, but they won’t let Ichiro wear it, either. So, Ichiro is now #31.

What other connections do Ichiro and Bernie have? Not much, though they both appeared on a 2001 Upper Deck baseball card (above), and they both have recorded solo albums on acoustic guitar…

Actually, that second album was recorded by some other Ichiro Suzuki. My bad.

At Bats: 3
Runs: 0
Hits, Game/Season: 1/110
Runs Batted In: 0
Walks: 0
Strikeouts: 0
Left on Base: 0
Average: .261
Box
Notes: Played right, batted eighth… Lineout, single, groundout… Some revealing quotes yesterday about how he’s felt since his trade to the Yankees: “Much better. I haven’t had this much fun playing baseball in a long time… I was hoping to play in an environment like this.” How did he feel about the Yankees asking him to bat in the bottom of the order, and play outfield positions other than in right? “No problemo at all.”
Next: Game 101 vs. Boston, 5:00 Sunday.

Wasn’t long after the big trade that photos of the Ichiro impersonator in pinstripes started appearing online (link)… Back when he dressed as a Mariner, someone snapped a photo of him taking a whiz at the Tokyo Dome (link)… 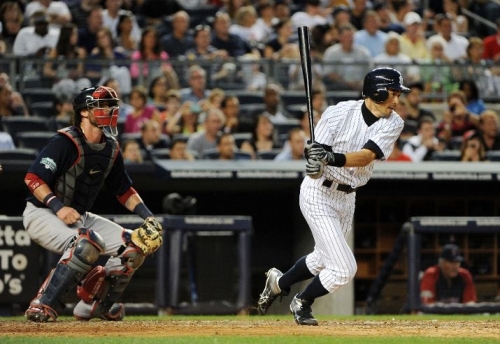 At Bats: 4
Runs: 2
Hits, Game/Season: 1/109
Runs Batted In: 0
Walks: 1
Strikeouts: 0
Left on Base: 2
Average: .261
Box
Notes: Played right, batted eighth… Flyout, single (above), lineout, grounded into force out… Ichiro’s first home game with the Yankees, giving us our first look at Ichiro in pinstripes… He doffed his cap to the right field Bleacher Creatures in the top of the first (below). 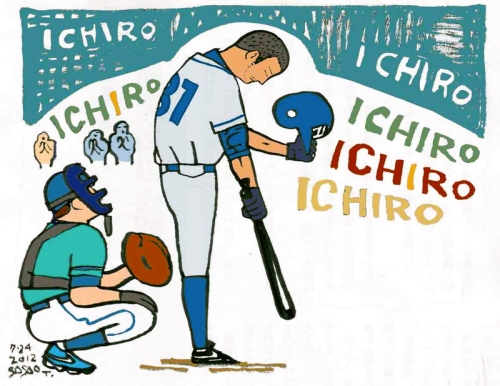 Tuesday’s SeattlePI.com: For the Seattle Mariners, it’s the end of the Ichiro Era. 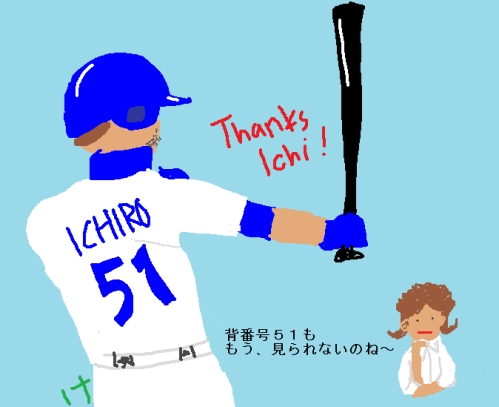 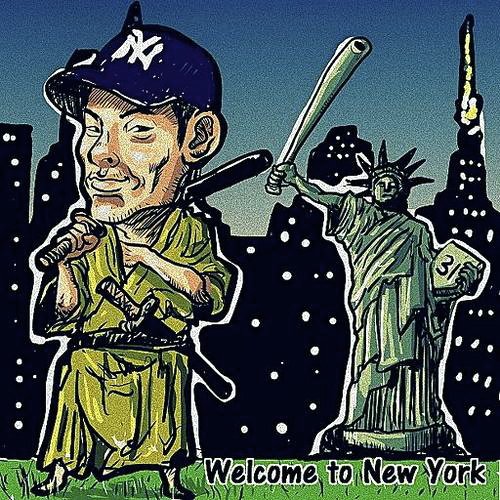 Let’s finish with a joke, from Tuesday’s Late Show with David Letterman monologue: “The Yankees have signed All-Star Ichiro Suzuki from the Seattle Mariners… He gets two million dollars and Cameron Diaz.” 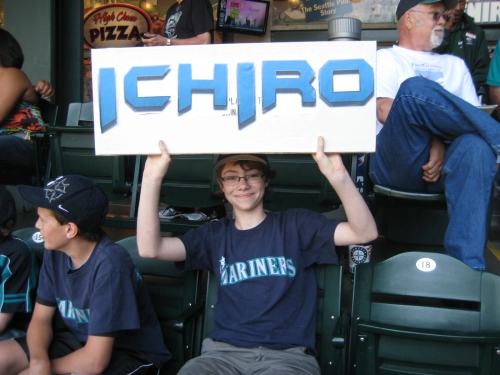 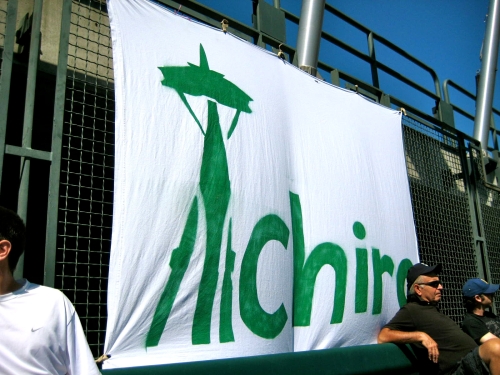 All photos by me.

Notes: Played right, batted leadoff… Groundout, groundout, single (above), popout, groundout… As he did in Monday’s game, he doffed his helmet and bowed before his first at-bat today… Caught stealing for the third time this season. 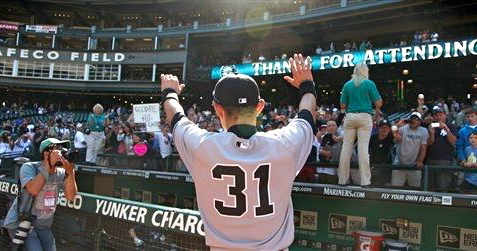 Though he’s already been a Yankee for three games now, today truly felt like the end of the Ichiro Era in Seattle. His three-day farewell wrapped up with the conclusion of today’s game, when he walked off Safeco Field for possibly the last time in his career. 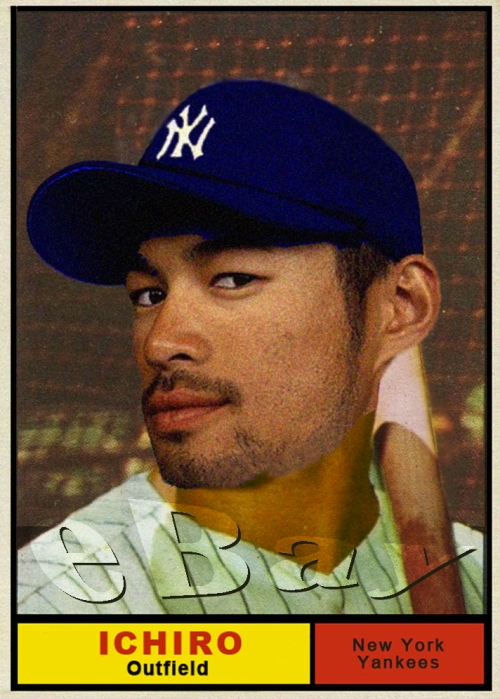 Above, a 1961 Topps replica knockoff; below, a sketch…

I dig this ’82 Topps knockoff… 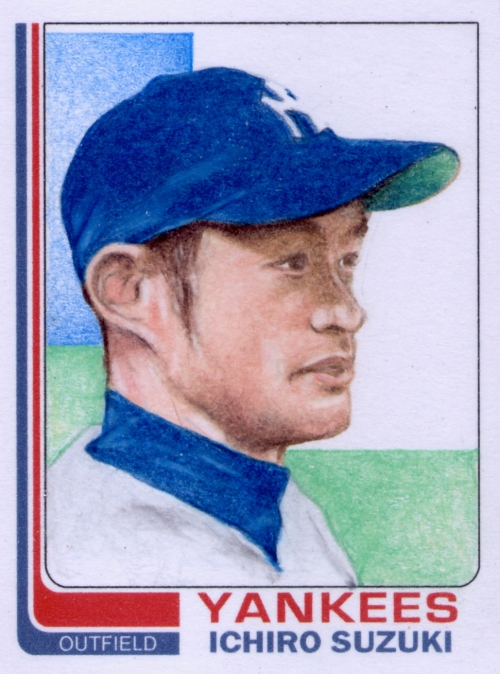 And one more illustration… 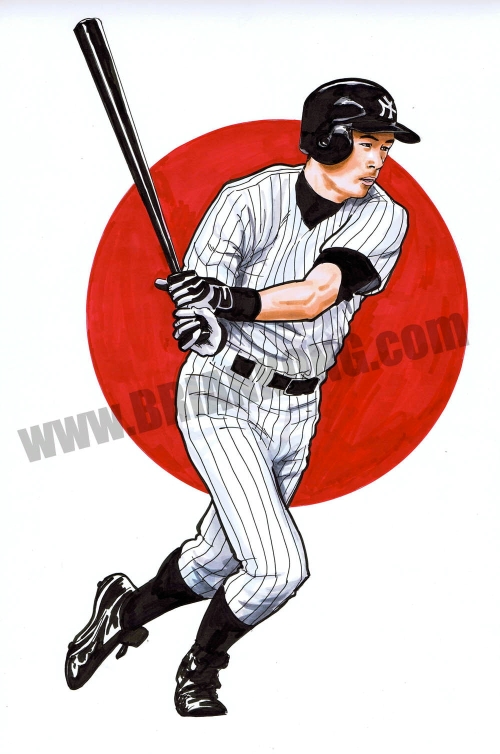 At Bats: 3
Runs: 0
Hits, Game/Season: 1/107
Runs Batted In: 0
Walks: 0
Strikeouts: 0
Left on Base: 0
Average: .262
Box
Notes: Played right, batted eighth… Popout, double (above), hit by pitch (below), groundout… Says here that Ichiro signed off on a few conditions imposed on him by the Yankees: changing outfield positions (he’ll mostly be used in left), hitting toward the bottom of New York’s lineup, and possibly sitting out against left-handed pitching. 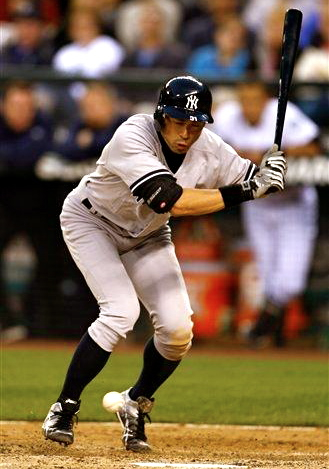 Ichiro to the Yankees: The Day After 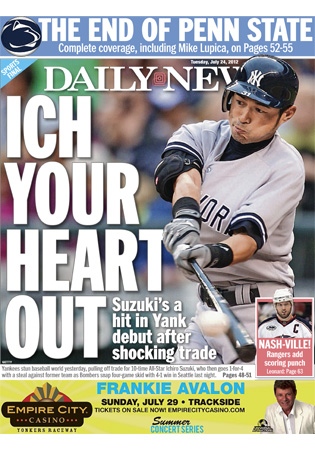 Here’s some Ichiro/Yankee stuff I found online this morning, like all these gifs… 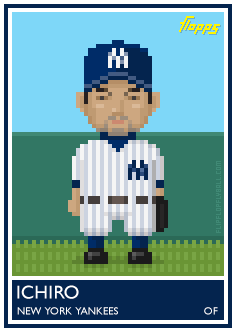 …a bit of silliness…

…and a couple interesting links: Sportspress Northwest‘s exhaustive compilation of highlights of Ichiro’s 11-1/2 seasons in Seattle, and the Japanese reaction.

At Bats: 4
Runs: 0
Hits, Game/Season: 1/106
Runs Batted In: 0
Walks: 0
Strikeouts: 0
Left on Base: 2
Average: .261
Box
Notes: Played right, batted eighth… Single, popout, groundout, lineout… 16th stolen base… Started in right and batted eighth in his Yankee debut… Caught the final out of the game to seal the Yankee victory.

It was serendipitous that Ichiro was traded to the very team the M’s are hosting for this current three-game series, giving his Seattle fans a chance to see him in perhaps his final few games at Safeco (albeit as a Yankee).

I first got word of the trade near Safeco Field, in the parking lot of Uwajimaya, and immediately knew I had to go to tonight’s game. As a show of Ichiro support, I wore my Yankees cap in public for the first time since I bought it in Texas in 2007 (it was a buy-two-get-one-free deal). I got all verklempt when he bowed to his cheering Seattle fans before his first Yankee at-bat (top), resulting in a single to right (below).

Though I’m saddened that my favorite-ever ballplayer has left my favorite-ever team, I feel a bit of relief, as this long-running “Ichiro Problem” for the Mariners has finally been resolved. Though it means the declining international superstar will not have spent his entire MLB career in Seattle (as I hoped), he will certainly enter the Hall of Fame as a Mariner. And while he’s now with the much-reviled Gotham nine, at least he’ll have a far better chance of winning a World Series ring before his exceptional career is over.

Uniform notes: Number 51 is now number 31, seeing as how 51 was Bernie Williams’s number with the Yankees. Though New York hasn’t retired the star’s number, they apparently aren’t willing to let Ichiro have it either… And while Ichiro has always had his first name on the back of his jersey, the Yankees don’t put player names on their jerseys at all. All of this will take some getting used to.

Anyway, quite an emotional day. Here’s video of his pre-game press conference, coverage by Tyler Kepner in the New York Times, Geoff Baker in the Seattle Times and Art Thiel, plus a whole heap of photos.

*This is a slight, Yankee-oriented reboot of this blog — it was New York’s 96th game of the season; ’twas Seattle’s 98th. I’ll still post game times in Seattle time, just ’cause I live here, though the home/away perspective will now be New York’s. Finally, despite the trade, this blog will continue at least as long as Ichiro stays in the game. I love Ichiro, no matter where he plays.

Sad to see him go. 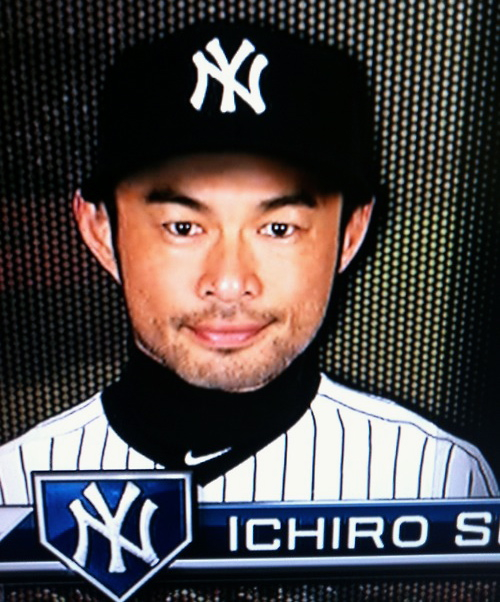 Read about it here and here.

At Bats: 4
Runs: 0
Hits, Game/Season: 1/105
Runs Batted In: 0
Walks: 1
Strikeouts: 2
Left on Base: 1
Average: .264
Box
Notes: Strikeout, reached on fielder’s choice, strikeout, intentional walk, single… Made a throwing error, his first E of the season… Larry Stone at the Seattle Times nicely sums up the current Ichiro/Mariners problem in Ichiro’s Legacy Muddles What Should Be a Clear-Cut Contract Decision.
Next: Game 97 at Tampa Bay, 10:40 a.m. Sunday.