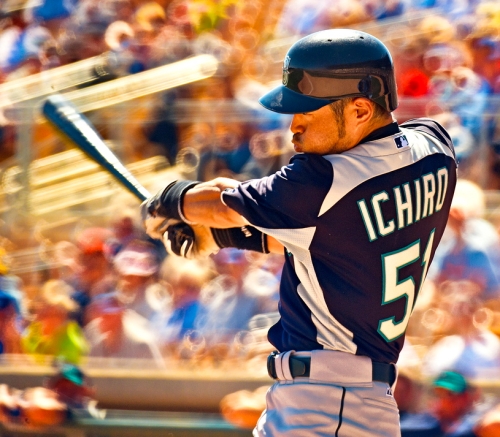 As much as I love baseball, spring training bores me. I couldn’t imagine flying to the Arizona desert for meaningless games between scrub-filled lineups wearing batting-practice jerseys; I’d rather spend my baseball dollar traveling to more interesting locales to watch regular-season games. Really, the only cool spring training thing I can think of is this. But, in the interest of all things Ichiro, here’s a review of his past six weeks in the Cactus League…

He reported to the Mariners’ spring training facility in Peoria on Friday February 18, and met with the press the following day. Then the day after that was photo day, which captured basic, all-purpose images like this… 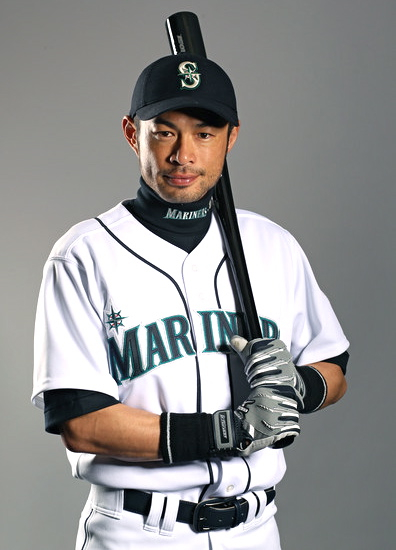 Seemingly every spring, the press pokes fun at Ichiro’s bold off-field threads. Unfortunately, I haven’t found any such pictures this year, but here is an example from a previous season.

Not everything in Peoria was fun and games. Things took a serious turn on March 11, as the previous night Japan had been hit with that 9.0 earthquake and resulting tsunami. Arriving at the clubhouse that morning, Ichiro declined all interview requests, only to say he had been unable to contact his parents in Nagoya, as phone service was overloaded and the Internet was often down. However, he was able to reach wife Yumiko, who was in Tokyo at the time, and she was okay.

A week later, on Friday March 18, Ichiro still hadn’t commented on the disaster, though his management company BowPlanning announced his donation of 100 million yen to the Japanese Red Cross. Likewise, Ichiro has previously made several donations to areas in Japan struck by natural disasters. In February, he donated 10 million yen to the Miyazaki Prefecture, which was struck by repeated volcanic eruptions. In 2000, he sent 13 million yen worth of clothing to Aichi Prefecture, which was hit by violent downpours. And in 1995, he donated 10 million yen to Kobe, home of his then-team Orix BlueWave, following a disastrous earthquake there.

Back to baseball, Ichiro saw limited action in Cactus League contests, ending yesterday. He played in just 18 of the Mariners’ 29 games, in which the team went 16-13. Ichiro went 14-for-51 for a .275 average, with two doubles, nine runs, three runs batted in, and a couple stolen bases. Of course, none of this counts — it’s just a warmup for the regular season. Yawn.

As I said, spring training bores me. On the other hand, the Mariners’ opening day is tomorrow — I can hardly wait.

This entry was posted in Miscellaneous and tagged Ichiro, video. Bookmark the permalink.