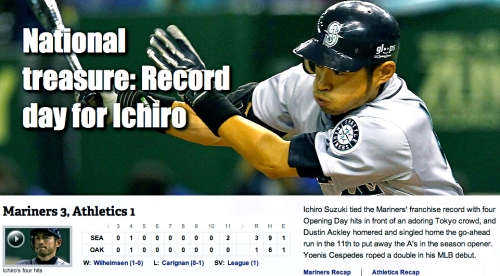 At Bats: 5
Runs: 0
Hits, Game/Season: 4/4
Runs Batted In: 1
Walks: 0
Strikeouts: 0
Left on Base: 0
Average: .800
Box
Notes: Killer game last night/this morning/tonight/whatever… Playing for the first time as a major leaguer before his enthusiastic countrymen, Ichiro singled in his first three plate appearances of the year, and in the 11th inning, drove in a run with his fourth hit of the game/season… Addressing the Tokyo crowd’s reception of the M’s and A’s, Ichiro said later, “Seeing how they welcomed the players, they were very warm-hearted. That makes you cry”… Geoff Baker sums it up nicely.
Next: Game 2 at Oakland (actually still in Tokyo), 2:10 a.m. Thursday. 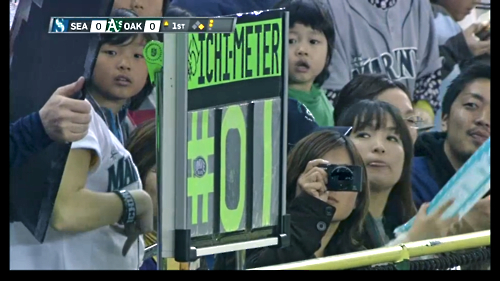 By the way, nice work by the Mighty Flynn, who posted the above screen grab in wee hours over at It’s a Long Season.

This entry was posted in Game Recaps, Japan and tagged game recap, Ichiro. Bookmark the permalink.